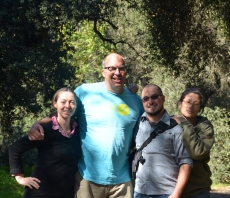 It’s Jessica here, summarizing the thoughts of the bloggers Joe, Jane, Josh and myself about our biggest stories of 2011.

But first, I want to take a moment to note that on a personal level, 2011 marked my decade as a Creek Freak.  In 2000 I’d begun mapping LA’s waterways, but it wasn’t until I, with a team of three other landscape architecture graduate students, had completed Seeking Streams that I realized I’d been hooked by the desire to bring buried waterways back to the surface of LA.  It’s been a decade of ideas & argument, at times petty politics, and for me, standing on the outside of bureaucracies with the power to restore our landscapes, feeling like I was staring up from the base of Hoover Dam.  But on the other side of that wall are gradual changes in watershed management, still rooted in a philosophy of nature control, but testing how controlled habitats can be better managed alongside more traditional engineered structures and approaches.  I’m still waiting for that leap to working with natural processes – treating the flood channels like the streams they were.  It will happen someday.  But the fight has been good for me too, it forced me to hone my understanding of how streams function, to understand the genesis of undesirable flooding and erosion, to better relate the role of waterways within an ecosystem.  Our ecosystem.

I believe restoration and protection of waterways happens in places like Portland, Seattle, Boulder, Austin because the waterways supply their water (or are the early-warning system of their aquifer) and because enough people understand ecology and have some experience and appreciation of natural processes in their lives to demand restoration and protection.  A version of the Boulder story I read once stated that they ran the Army Corps out of town when the Corps came offering channelization.  A citizen-led initiative led to building restrictions over Austin’s aquifer recharge zones, and citizens informed the planning processes in Seattle and Portland that wrapped endangered species recovery in a package with Clean Water Act water quality commitments.  In LA, we mostly defer to experts.  We eschew big ideas unless someone from higher up the political hierarchy proposes it.  We sigh at the tangle of bureaucracy that makes it phenomenally difficult (and expensive) to get even a small plot of land planted, a bit of roadway striped for bicycles – something that definitely succeeds in keeping us focused on the short-term.  And we fight.  We fight opportunism of a few powerful people er, corporations, who profit by threatening our community dreams, something that also keeps us focused on the short-term, on triage.  (As members of our community, these “people,” er corporations, should share our vision.  Which vision, you ask?  Good point.)  And we fight each other.  If we have a common vision, and I’m not sure that we do, it lacks ecosystem function.

Let’s celebrate our steps towards sustainability, but with a solid vision that includes the regeneration of our degraded riparian ecosystems.  May our steps be clearly towards support of our incredible natural heritage, the biodiversity that supports us. 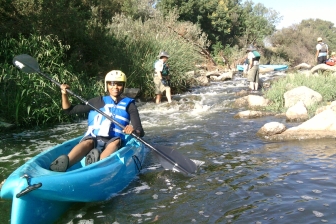 This year saw the unveiling of legalized (if highly monitored) boating on the LA River!  This summer’s canoe trips through the Sepulveda Basin helped bring the river to life for people lucky enough to get tickets.   Quoting from Joe’s earlier post:

I’ve mentioned it before… and huge props again to George Wolfe for showing me this… but we treat the river the way we picture it in our heads, in our stories. If our mental image of the L.A. is a godforsaken grey concrete canyon, then we’re unlikely to invest in it. If our mental image of the river is a place where there are boats and birds and fish and trees and bikes and… jobs! … well, then, of course, it’s worth protecting and investing in.

It’s been a good year for expanding bicycle facilities on the LA River, with ground-breakings for new bikeways and improvements such as solar lighting.  Now if we can just keep the copper wires attached….  But bicycling got its own non-creekfreaky shot-in-the-arm with the successes of CicLAvia.

Construction to enhance the creeklet in North Atwater Park is well underway – we should see a ribbon cutting early in 2012!  It’s already being tested by rain.  We’ll call this one a victory even though the project was part of a legal settlement…and the creeklet was already in a natural channel even though it is not a historical waterway.  What it will do is offer us a vision for more naturalized creeks in city of LA parks – an important step towards increasing our collective appreciation of our local ecosystems and understanding options for coexisting with them.  I’ve also been working on the planning phases of two creek restoration projects that, depending on what phase they’re at, we may be able to write about in 2012.

Why it is reasonable (and important) to rethink Los Angeles as a place that provides its own drinking water, and inspiring historical landscapes of aquifer recharge, of springs and streams were also given artistic expression at the Huntington this year.

Courts threw out the lawsuit against the planned Malibu Lagoon restoration.  Why do I call this thought-provoking instead of a victory?  Mainly because it provoked a firestorm of comments, one of the demonstrations that we don’t have a common vision or understanding of ecological processes.

Japan’s devastating earthquake rippled our coast, and reflected the hazards we subject ourselves to by ignoring natural processes in land planning.

An immediate threat to a cohesive Los Angeles River vision is embodied by the development option of the “person” known as Trammel Crow, who could take the Rio out of Rio de Los Angeles State Park.  Or ransom it back to us.

Arcadia's oak woodlands, gone but not forgotten. Photo by ecotonestudios

This was the year we woke up to the impact of our sediment management approach – but are still a long way from acknowledging sustainable solutions.   If we thought it was unacceptable to cut down 100-year oak trees to make way for a dirt pile, why can’t we get behind restoration of sediment transport – river restoration?  Instead, we’ve signed up for more dirt piles in our wildlands, including up in the Angeles.

Beautiful bridge design is a mostly lost art.  They remind us that the waterways they crossed were once also impressive.  Many of these historic bridges are slated for demolition or alterations.  Meanwhile LA was put through “Carmageddon” to prevent the relocation of Mulholland Highway’s “historical” route over the 405, costing taxpayers beaucoup bucks.

Steadily, the Santa Clara River is subjected to development patterns that eventually brought the Los Angeles River to its concrete entombment.  We are fortunate, indeed, that the rest of the animal kingdom is limited in their capacity to fight back.  Other, smaller waterways threatened by, quite literally, tunnel vision,  include Stone Canyon and an unnamed drainage in the way of a mall development in the San Fernando Valley.

You are currently reading Creek Freak’s Top Stories of 2011 at L.A. Creek Freak.