This afternoon, before an assembled crowd of about fifty, Los Angeles City Councilmember Dennis Zine presided over a groundbreaking ceremony for a new stretch of Los Angeles River greenway and bikeway. Construction has begun on the 2.2-mile segment of landscaped bike path, extending from the Vanalden Avenue footbridge to the end of Hartland Street, just upstream of the Mason Avenue Bridge.

L.A. Creek Freak reported on this project earlier; for details check here for project background, here for art and design, and here for funding and phasing.

Today’s weekday afternoon crowd was roughly half city and agency staff, plus assembled creek freaks (including Friends of the L.A. River), bicyclists, and neighborhood leaders. One gentleman, who’s name I didn’t get, showed up to protest the project:

When I spoke with the sign-waver briefly, he gave somewhat contradictory arguments: that the project costs too much money, and that it would take too long for the Valley to wait for the whole 20+mile cross-Valley (and 50+mile source to sea) bike path to get built. Hmmm… If folks don’t want to wait, then let’s push for more money for bike paths.

I actually kind of agree with him in questioning the cost of the project. The $7M is a lot of money for you and me… and a lot for a city that’s facing serious budget woes… but it’s a bit more than just a $7M bike path. It’s more like a 2-mile-long linear park. There’s a whole grab-bag of features that include the path itself (with five expensive grade separations: under-crossings at bridges at Tampa, Corbin, Winnetka, Vanowen, and Mason) plus: landscaping, solar lighting, art, signage, bio-swale, and more.  As I commented to in that earlier post, this segment seems to me:

perhaps a bit over-built… like a lot of features have been condensed into a fairly small area… I think it’ll be nice, but I hope that it doesn’t set too high a standard, so that, in the long run, we end up getting just a short fancy path… instead of a longer path…

Another criticism the sign man had was that the neighborhood already has the Orange Line Bike Path, so a Los Angeles River bike path isn’t needed. The Orange Line runs parallel roughly half a mile south of the river for the length of this project. At full build-out of approved plans, the Orange Line and the Los Angeles River paths will intersect near Canoga Avenue (in Canoga Park) and near Balboa Boulevard (in the Sepulveda Basin.) I actually think it’s great to have multiple bike paths running through neighborhoods at roughly half-mile intervals; that’s what I call a bike path network. That’s the kind of coverage that’s needed to make bicycling really safe and convenient for everyone. Think about an analogous comment regarding car facilities. I’ve never heard anyone say “we don’t really need a road for cars right here – because we’ve already got a parallel road a half mile away.” Bike facility density should be similar to car facility density.

Now, at the base of this man’s criticism, there is a valid argument to be made that if we have scarce bikeway resources, in prioritization, it doesn’t make sense to do redundant facilities so close to each other. We should instead spread this funding more evenly throughout the planned network. I think that this is true if we’re starting from a perfect blank slate and allocating dollars is a perfectly wise way. That’s not the case for either of these facilities, though. They’re both opportunistic bike projects smartly piggybacked onto other infrastructure construction. The Orange Line Bike Path was built as part of the Orange Line Bus Rapid Transit project. The West Valley River Bike Path was selected for construction at this time in order to dovetail with bridge construction. The bridge projects are already underway. 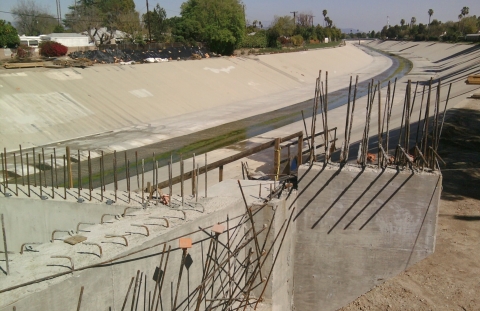 In the past, a lot of Los Angeles River revitalization projects have been concentrated in the Glendale Narrows, just upstream from downtown Los Angeles, so it’s good to see that we’re now sharing the wealth with other areas. The river is a spine that runs through a lot of Los Angeles (city and county), and it’s nearly impossible to make just some parts of it healthy and inviting, if we neglect other areas. It’s difficult for Winnetka residents to feel connected with their river; it’s anonymous, covered on three sides with concrete, surrounded by fences and KEEP OUT signage, and frankly, a serious drowning hazard during rains. This project is a small step toward a healthier river that the community can enjoy. It’s one phase in moving toward a river that’s a resource, not a liability… but there will still be plenty of work to do after this project opens. I look forward to riding this bike path, with its initial phase due open in 2012.

At today’s groundbreaking, a few folks present disparaged the concrete river… pretty difficult to see as a natural feature… or even an asset to the community… but as the speakers spoke on about the project, I looked down into the concrete channel. There was plenty of clear water flowing, and quite a serious algal bloom forming a bright green ribbon. A mated pair of mallard ducks were gradually making their way upstream, dipping and bobbing and nibbling. Echoing some of my favorite words from Jenny Price, I don’t think that these river ducks “got the memo” about just how badly this stretch the L.A. River’s been doing.