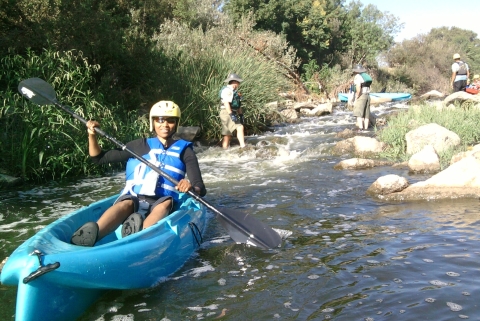 I got a chance to kayak the L.A. River yesterday. I’ve been kayaking in the river a few times here and there, and most memorably the incredibly wonderful three-day expedition in 2008. Yesterday was the first time I officially, legally, kayaked with a permit!

The program is called Paddle the Los Angeles River. Like their Facebook page here. In case readers want to do participate, I have to warn you that all their slots sold out in 10 minutes. It’s a one-season pilot program, and, hopefully, if all goes well, it’ll come back around again. It’s presented by the Los Angeles Conservation Corps, with assists from the Mountains Recreation and Conservation Authority (MRCA), The River Project, Los Angeles River Expeditions, Friends of the L.A. River, and Urban Semillas. It’s been covered all over tv, print and internet media, so I am not going to give a huge amount of background, but kudos to leadership from George Wolfe and Los Angeles City Councilmember Ed Reyes. (And my apologies for Creek Freak not getting to cover this sooner.)

I got called in as a speaker/guide, and I was really glad I was able to do it. Each trip included about 10 participants, three LACC guides, two MRCA rangers and a guest river expert. Participants paid $50 for a nearly-three-hour expedition that covered about two and half miles, embarking near the Balboa Boulevard Bridge, and taking out just downstream of the Burbank Boulevard Bridge. It’s entirely in the Sepulveda Basin, in the middle of the San Fernando Valley.

Participants signed releases, and suited up with life-vest and helmet.

Conservation corps staffers gave a safety talk and showed folks proper ways to get in and out of kayaks and canoes.

Kayakers walked down to the river and hopped in!

Boaters tooled around the area upstream of the Balboa Boulevard Bridge, marveling at all the birds, the tall trees, the mist coming up off the peaceful early morning river. It’s quite an extreme contrast from the suburban sprawl of the surrounding San Fernando Valley.

The river through the Sepulveda Basin has a series of what engineers call “grade-control structures.” These are basically low dams that the river flows over. What they do is create a series of steps. Due to the step-dams, the river there is very calm. There’s some soft current pulling downstream, but it’s more like a lake, less like a natural river with pools, riffles, rapids, etc. 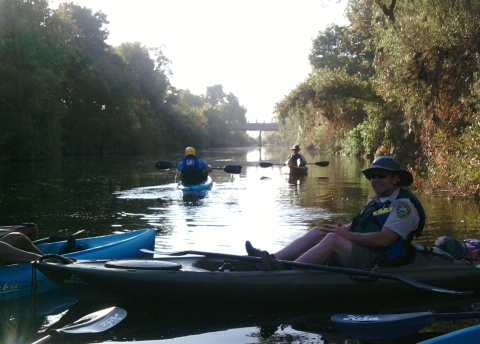 The MRCA rangers gave a brief talk. I gave mine. And we were off downstream.

The first grade-control structure (of three) has a little chute that the guides call cattail alley. Each dam crossing required a bit of assistance from our guides – pulling and pushing canoes to get from one step down to the next.

Incidentally, I was really happy to hear LACC and MRCA folks calling out new river place names: “cattail alley”, the “little grand canyon”, the “sandbar beach”. It warms my creek freak heart that these folks are out working on and in the river every day, and to do this, they’re learning and knowing the place. This knowing includes naming… and naming means connecting with place, and coming up with words to describe place. So while cattail alley wasn’t all that spectacular, I think it’s important.  That tiny place has gone from anonymous to known. The place has a name that’s vernacular for a dozen program staff, passing to dozens of boaters.

In between the small dams, the water is smooth and calm. The tour passed the confluence with Bull Creek. Then over another small check dam. Each small dam requires the guides and rangers to come together and assist the individual boaters over the brink.

Rangers and guides assisting kayakers going over the falls

Then another relaxing glassy stretch.

At the beginning of the tour, the river’s bed is soft-bottom, earthen and its sides are lined with sloped concrete. There are lots of trees growing in the earthen bottom, so, for the most part, the concrete isn’t all that visible. Downstream of the  second check-dam, the concrete reinforced sides go away. At that point, the river is about a mile upstream from a huge dam, so apparently there’s not a lot of need to reinforce it. In that area, the river gets a little more curvy. Rivers like to meander. The mighty Los Angeles was straightened, when what it really wants to do is to meander. For this brief stretch, it’s doing just that; it’s reasserting itself.

Just when things are getting really chill, and urban Los Angeles seems like a distant memory, one spots cars crossing the Burbank Boulevard Bridge. The group pulls together for a brief reflection. Then we paddle ashore. Rinse off. Hop in the van. Receive our bumper sticker. And we’re done.

Pardon me while I editorialize for a moment about jobs. Here at L.A. Creek Freak we’ve written extensively about the whole Clean Water Act navigability thing (our tldr 5-part Of Nexus and Navigability series: >1 >2 >3 >4 >5 ) and how the federal Clean Water Act applies to navigable waterways including the L.A. River. Well, here in the Paddle the L.A. River program, we have right-now right-now examples of the kind of jobs that come from a healthy river. Folks pay to boat on the river. Youth get paid to shepherd tours on the river… so… of course there’s a federal interest in protecting this. Dammit!

I’ve mentioned it before… and huge props again to George Wolfe for showing me this… but we treat the river the way we picture it in our heads, in our stories. If our mental image of the L.A. is a godforsaken grey concrete canyon, then we’re unlikely to invest in it. If our mental image of the river is a place where there are boats and birds and fish and trees and bikes and… jobs! … well, then, of course, it’s worth protecting and investing in.

If you get a chance to Paddle the L.A. River – do it. You won’t be disappointed. Go to their website, give your email address. Support them by donating and purchasing t-shirts and other fun stuff at their online store. L.A. Creek Freak will announce future official boating tours as we hear about them. Again, big thanks to all involved.

You are currently reading On a Kayak in a River in a Valley in Los Angeles at L.A. Creek Freak.