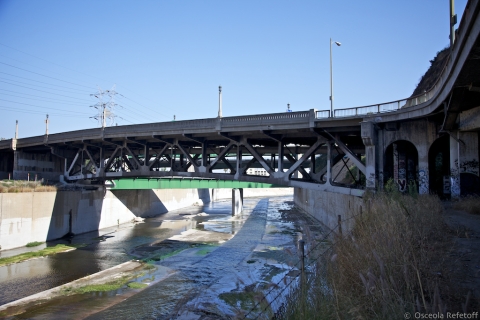 The city of Los Angeles is proceeding with demolition of  the historic Riverside-Figueroa Bridge over the L.A. River. I’ve been covering this story over at Streetsblog Los Angeles, see today’s article featuring sad photographs showing the bridge being torn up. It makes me sad that this neighborhood-scale bridge is being torn down in favor of a freeway-scale bridge. In this earlier post, I called the project “nothing but zombie engineers fulfilling a now obsolete paean to the automobile.” I don’t think I can outdo that characterization today. 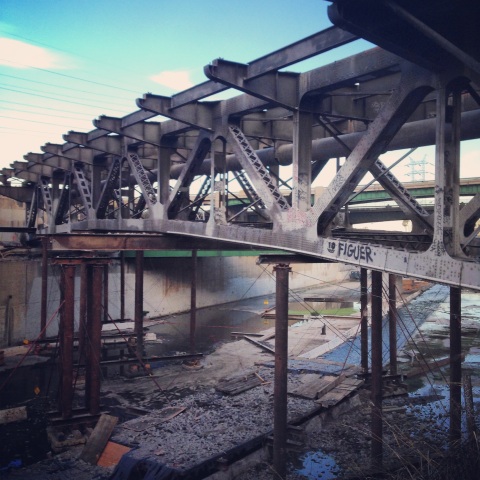 Places to Visit: the East Fork of the San Gabriel River and the Bridge to Nowhere 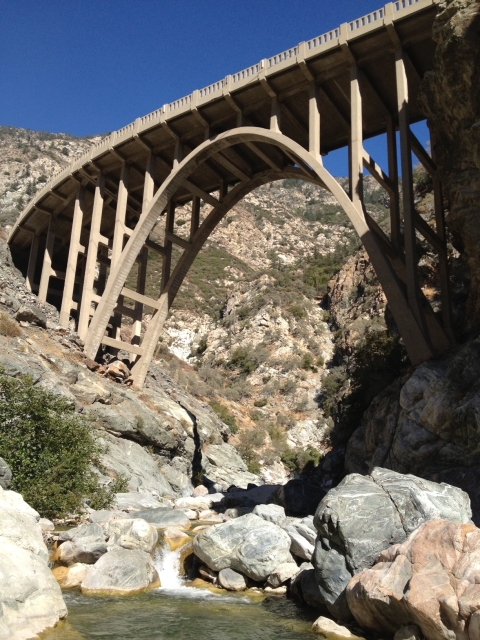 The Bridge to Nowhere over the East Fork of the San Gabriel River, photos by Carrie Lincourt

Last week, a friend and I took a really great hike up the East Fork of the San Gabriel River to the Bridge to Nowhere. It’s an excellent local day hike (9.5 miles round trip) that I highly recommend, though it’s probably best done during cooler seasons – say between late September and early June.  END_OF_DOCUMENT_TOKEN_TO_BE_REPLACED

If there was any doubt that the city of Los Angeles’ wrongheaded destruction of the Riverside-Figueroa Bridge is nothing but zombie engineers fulfilling a now obsolete paean to the automobile, this just in! Not only is the end-product (due 2015) a massive freeway-esque car-centric bridge… but, already this week, the construction zone itself is a dangerous gauntlet for pedestrians.

(No thought has been given to bikes, either, but thick-skinned intrepid bike commuters can pretty much go wherever cars can go… so we cyclists can still use the bridge roadway that’s set aside for cars.)  END_OF_DOCUMENT_TOKEN_TO_BE_REPLACED

Return to the Center of the Seventh Street Bridge

Detail of the dedication plaque on the Seventh Street Viaduct

There’s a promising new report about possibilities for the future of the Seventh Street Bridge over the L.A. River, so I got another call to head into the bridge and show off the space. I plan to write about the new report, but I ended up with more than enough photo and video material for one post, so I am going write about the bridge here, then separately post about the report later.  END_OF_DOCUMENT_TOKEN_TO_BE_REPLACED

Say Goodbye to the Riverside-Figueroa Bridge

It’s not the greatest of the Los Angeles River’s historic bridges. The L-shaped Riverside Drive Bridge that connects Elysian Valley with Cypress Park is one of at least five Riverside Drive Bridges in Los Angeles… so it’s commonly called the Riverside-Figueroa Bridge. It’s sort of a patchwork bridge, with parts from 1928-1929, 1930s and 1950s. And it’s going to be demolished… very soon. 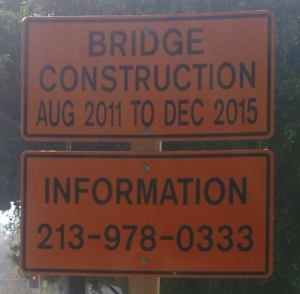 I knew it was coming, but just this week I spotted signs saying “BRIDGE CONSTRUCTION AUG 2011 to DEC 2015 – INFORMATION 213-978-0333. A bit further on, there were construction trucks parked on the bridge and some construction workers huddled, discussing and pointing.

At this point I feel sad for this nice old bridge… so I am going to try to faithfully record its history here. Then perhaps in a future post, I will explain some of the features of the new bridge replacing it (you can get some sense for the new bridge from this earlier Confluence Park diagram.)

I am disappointed to see it go. It’s a designated L.A. City Historic Cultural Landmark (No. 908), but, it’s one of the lesser historic bridges, so, at this point, I am pretty much resigned to see it go. There are much better bridges under great threat of demolition, including 6th Street and North Spring Street, and the city of Los Angeles’ bridge program has others on its lists (for example.)  END_OF_DOCUMENT_TOKEN_TO_BE_REPLACED

Downtown River Bridges in the News this Week 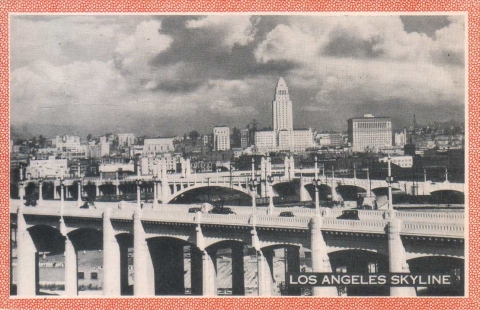 Vintage postcard featuring 6th Street Bridge in foreground, and 4th and 1st Street bridges in middle. Thanks Netty Carr for loaning me the postcard.

A quick post to alert creek freaks to two historic bridges in the blogosphere this week:

> Yesterday, Blogdowntown highlighted the double-decker 7th Street Viaduct. The post celebrates the 84th anniversary of the bridge opening on September 19th, 1927, and includes interesting facts about who paid for what back then. See also Creek Freak’s earlier journey into the interstices of that great bridge.

> Last Saturday, Youtube user Corvobell posted this video of the set of an upcoming Batman movie – filming under the 6th Street Bridge. Though that 1932 bridge has a long movie pedigree (appearing in Grease, SWAT, and even The Simpsons Movie) it is under threat of demolition if city proposals move forward. 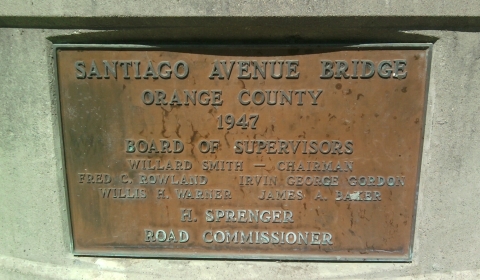 One of two identical commemorative metal plaques on the 1947 Santiago Avenue Bridge, located in the city of Santa Ana

I’ve been spending some time with family down in Orange County… and I got a chance to explore Santiago Creek. I did this exploring mostly by bike. It was actually really great to get my mind off of things and just follow an urban creek upstream and down. I love to bike around on streets and anticipate where I might be able to access a creek next, looking for what sort of condition it’s in, how access, bicycling, reinforcement, humans, critters, vegetation, etc. all are working or not for the waterway.

I did a great deal of this sort of exploration a lot in the late 1990s when I was first setting up the monthly Down By The River walks series for Friends of the L.A. River, and then quite a bit in 2005 when I was working on my book Down by the Los Angeles River. I recommend it highly – exploring creeks, I meant, not my book – though I recommend that too.

Whether you’ve got a concrete channel or a natural creek in your neighborhood, explore it – see where it flows to (often a journey from urban to even more highly degraded and concreted… until you get to the ocean) and where it flows from (of ten a journey from concrete to natural foothills streams.) It can give one a sense of place… often it takes one to the older parts of a place – great historic neighborhoods and bridges, other depression-era public works… sometimes just a slice, a sort of transect, through neighborhoods, including great places and neglected ones.

Santiago Creek is a tributary of the Santa Ana River. Santiago runs mostly through the cities of Santa Ana and Orange. I wrote about Santiago Creek briefly here, and ran Joel Robinson’s Santiago alert here. There’s also the Santiago Creek Greenway Alliance that’s working to protect the creek. I am going to write more extensively about my recent Santiago Creek explorations soon, but I thought I’d get something posted quickly about one feature I encountered.

Here’s a video I shot on the 1947 Santiago Avenue Bridge:

END_OF_DOCUMENT_TOKEN_TO_BE_REPLACED

You are currently browsing entries tagged with historic bridges at L.A. Creek Freak.