Journey into the Seventh Street Bridge

My friend Jason Neville was asking me some questions about possibly accessing the interior space of the Seventh Street Bridge… so I responded that we should just go and explore.

I’d never actually been inside the Seventh Street Bridge over the Los Angeles River in downtown Los Angeles. Many bridges don’t actually have an inside, but 7th does.

The concrete bridge was orginally built a hundred years ago – in 1910 – as an at-grade three-arched bridge. One way to tell that it’s a very old bridge is that it has solid arches. The North Broadway Bridge (1911) was the first example in the western United States of a new bridge technology: the concrete compound arch. Broadway, and most of the downtown bridges that followed it, have large arches that contain smaller arches within them. These compound arches are also called “open spandrels.” Compound arches were invented by the Chinese around 600AD, but weren’t done in L.A. in concrete until 1911. The compound arch / open spandrel makes for a lighter bridge, hence less materials required and less expensive.

The Seventh Street Bridge doesn’t have compound arches; it has solid arches – not surprisingly also called “closed spandrels.” There are only a few other bridges like this still around locally. The other ones that come to mind for me are: York Boulevard Bridge (1912) and San Fernando Road Bridge (1913) both over the Arroyo Seco, and the Cesar Chavez Bridge over the 10 Freeway (1906). Generally these solid arches are filled with dirt.

Back to the Seventh Street Bridge… which has two decks. The original from 1910 was built on top of in 1927 to create the Seventh Street Viaduct. A viaduct being a long bridge that crosses multiple spans – in this case, both the river and the railroad tracks on both sides of it. The second deck was added in the heyday of city Bridge Engineer Merrill Butler’s extensive bridge-building spree from the mid-1920’s to the late 1930’s (though, in my opinion, the spectacular bridges taper off after the 1932 Sixth Street Viaduct.) Merrill Butler served as the city Bureau of Engineering’s lead engineer for bridges and structures from 1923 until 1961. He came on board to oversee the implementation of the city’s 1924 $2 million Viaduct Bond Act, and continued building bridges with bonds and federal public works funding. (For more on Butler and L.A.’s historic bridges, see my book Down by the Los Angeles River, Wilderness Press, 2005.)

From this photo you can see that there’s a space between the lower 1910 deck and the upper deck built in 1927. I’d been aware of this space for a long time; it’s been talked about as a space that might be used for some sort of riverview restaurant or club. Jason had heard that there was a manhole cover that allowed access into the lower deck space… I was curious.

We bicycled out to the site and had a look from a few angles. The manhole covers are there, but didn’t look too promising. The ends of the lower deck are sealed off, and abut active rail lines. Suffice it to say that we did find a way in… and that I am not going to give away my new secret (which was clearly already known by plenty of graffiti artists and homeless persons.)  Any creek freak readers who want to try it should be really careful about any activity like this and should sign something saying that you won’t sue us – especially around fast-moving active rail lines.

Here are some photos I took using my cell phone… which is not the ideal device for capturing neither the impressive interior space, nor the phenomenal views. 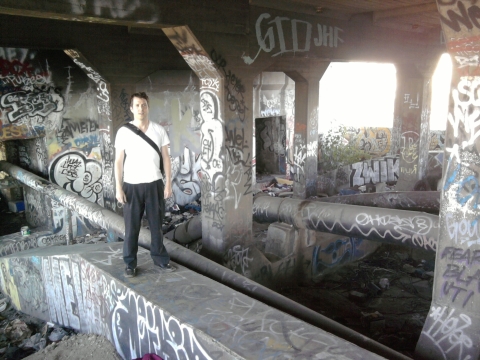 Jason standing on a large concrete beam inside the bridge. Below the beam appeared to be dirt fill, with lots of trash apparently from the homeless, and plenty of discarded spray cans.

The long interior space is broken up by structural walls and pillars. Jason is standing in front of an open doorway cut into one of two walls breaking the space into thirds.

There are quite a few old pipelines in the interior, though the one on the right in this photo is clearly cut and not in use

This shot was intended to capture the great view of the Sixth Street Bridge, but the interior/exterior light levels were too much for my meager cell phone camera

Thanks, Jason, for getting me into an L.A. River space where I’d never been before. That doesn’t happen every day.

§ 9 Responses to Journey into the Seventh Street Bridge

You are currently reading Journey into the Seventh Street Bridge at L.A. Creek Freak.