Processes of becoming: water and wastewater in some Northwest urban landscapes

Last week I spent time in a city where rivers and streams are so much a fabric of the culture, they are a character in public life, possibly even approaching equals along with salmon, Microsoft, clearcut forest, and eagles… END_OF_DOCUMENT_TOKEN_TO_BE_REPLACED

Off to the Rio de Flag 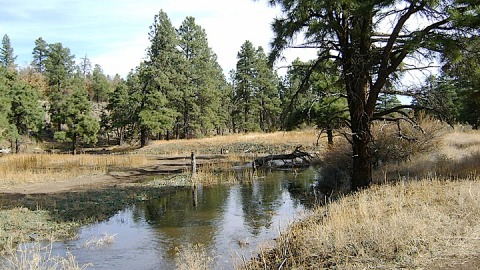 I’m boarding the Southwest Chief to Flagstaff, home of Friends of the Rio de Flag, a community group organized to “support preservation and restoration of the natural beauty and beneficial functions of the Rio de Flag stream channel.” I’ll be talking at their annual Membership Meeting on the topic of “An Ecological Los Angeles: Just Add Political Will.” END_OF_DOCUMENT_TOKEN_TO_BE_REPLACED

April 4th is the deadline to give comment on a draft EIR that if approved will consign another small creek to permanent pipe-age in the City of LA.

[Updated paragraph] Download  the draft EIR from this City of LA site by clicking Environmental/Draft EIR in the left panel of that page. Then click on the bold-font title of The Village at Westfield Topanga to be taken to a download site.  That bold font fooled me when I first wrote this post, didn’t understand that it was a hyperlink. Thanks to readers for setting me straight! It can also be found at the Central Library, and Woodland Hills, Canoga Park and Platt Branch libraries or purchased on CD-Rom.

The creek – located at Owensmouth and Victory in the San Fernando Valley, has been dubbed Owensmouth Creek by locals. Its history is a little tricky to me, as it doesn’t appear on historical USGS maps.  GIS data from the County of Los Angeles, however, does indicate what looks to be a diversion of drainage from Topanga Canyon Boulevard in the San Fernando Valley, labelled as an open channel.  Navigate LA calls it a city stormdrain, D-17768. But more incontrovertible is photography. Jim Anderson, of the Woodland Hills Warner Center Neighborhood Council, shared with me a photo of the threatened waterway. 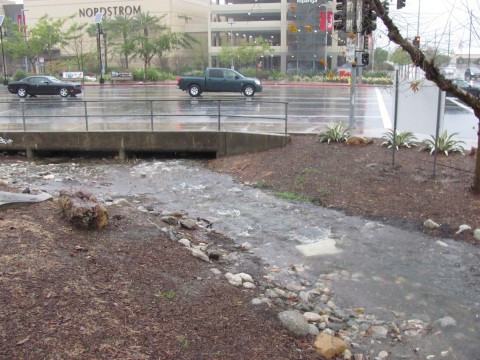 Looks like we’ve got a stream that meets the City’s definition. So why again is this small edge of the property being piped and paved, not set aside as a public park, or dare we suggest, part of the Low Impact Development/stormwater mitigation plan?

I’m told it’s needed for part of a Costco members’ service station at the planned Village at Westfield Topanga, folks.

I’ll just leave us all to ponder that for now.

Coverage in the Daily News here.

The Palos Verdes Peninsula is mostly developed – but canyons, with their wily waters and sediment movement – and landslides – remain – to the chagrin of whoever lives in their path downstream, or whoever carves a road through their eroding banks. Today that would be a senior citizen’s mobile home park in San Pedro, and Palos Verdes Drive East, respectively.

Tonight there will be a meeting to discuss, as the Daily Breeze puts it, “stabilization” of San Ramon Canyon.  I went out a few weeks ago to look at the offending canyon with a creekfreaky friend and what we noticed is that there are relatively small catch basins at Palos Verdes Drive, which can easily be blocked by the rocks coming down from the canyon. (We didn’t hike up to view the landslide area or potential impact to Palos Verdes Drive East, so no comment there. Photos in a Palos Verdes city powerpoint are illustrative of the problem-link below) But for the flooding part of the issue, as so often seems to be the case, it’s the catch basin that’s the problem, a hydraulic constriction interfering with the flow’s path. It was almost as if the road’s drainage system had been designed to flood.

It’ll be interesting to find out what their stabilization concept is, my hope is that the city’s experts know how to think creek.

And click here for a link to the City of Palos Verdes’ information about the project, including a link to a powerpoint presentation. 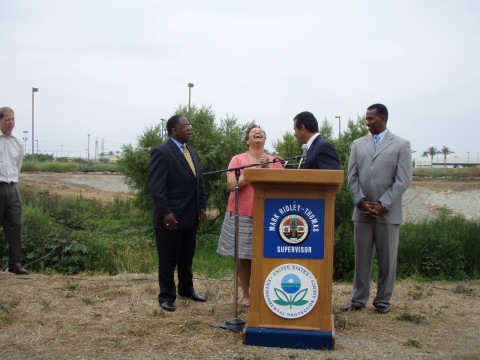 Last Wednesday’s press conference on Compton Creek with EPA official Lisa Jackson has been the source of much navigability excitement in the creekfreak blogosphere, but as Joe mentioned, the press conference had another purpose: to bring together officialdom to celebrate and unite in purpose around acquisition of part of Compton Creek.

If you think the navigability issue on LA’s waterways is tricky, you should take a look at ownership! END_OF_DOCUMENT_TOKEN_TO_BE_REPLACED

A step towards preserving the Santa Clara River

Many of you already know the story of the Los Angeles River and its demise.  And many of you also know that just beyond the hills from us, development in the Santa Clarita area continues to threaten the Santa Clara River, with paving of its watershed, building in its floodplain, and straightening and leveeing (albeit with dirt or soil-cement) of its upper reaches, repeating the early phases of the trajectory of the LA River’s “improvement”.

So it’s encouraging news (although you’d never know it from reading the comments at the end of the linked article) to learn of another acquisition of land along the Santa Clara River, this one on the lower end of the river.  The Nature Conservancy has put together a land deal with the owners of the McGrath property in Ventura.  The California Coastal Conservancy has also been working in the region to acquire land along the river for its preservation.

Check it out:  Conservancy to buy river property » Ventura County Star.  And if you’re not already worn out by the bitterness of some of your fellow humans, read the comments. 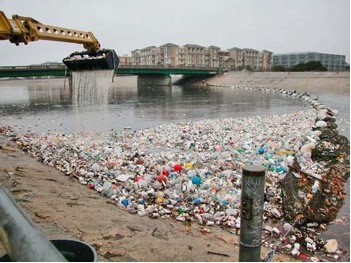 >The South Los Angeles Report tells about teaching science using the story of trash in L.A. waterways and in the Pacific Ocean. Read and watch their findings here.

>The city of Pasadena is working with neighbors to preserve and improve Annandale Canyon – which is nestled in between West Pasadena and Eagle Rock. More information here. (Thanks to Meredith ArroyoLover McKenzie – also read her recent tribute to the York Boulevard Bridge.)

>Lastly, please be careful when exploring local creeks during the wet season. The Los Angeles Times’ L.A. Now reports a sad story of a youth and his dog swept away by Brea Creek. 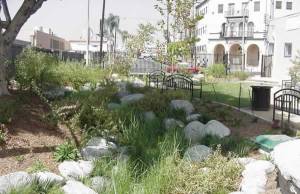 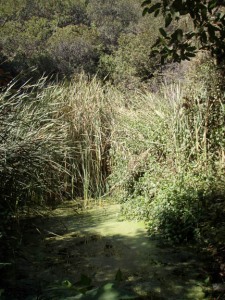 a small wetland has been created by ponding of the creek's flows at a road culvert. 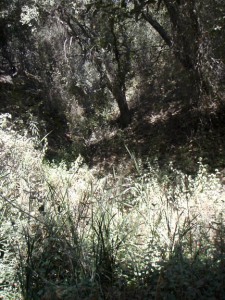 When I drove by there last week, a deer bounded out of the creek.  The creek zone was cool and moist, with sycamores, poison oak, and some reedy plants – due to the poison oak I didn’t try to get too close to take a better photo.  But it was clearly a nice intermittent-looking stream surrounded by live oaks.  Upstream, a road culvert caused ponding of the stream’s flows, creating a small wetland environment.  Looking downstream from above, the stream cut a deep ravine, one that I’d want help getting in and out of.

Protecting this steep, southern California stream only helps environmental quality – it protects water quality and habitat, and improves the quality of life of the people who live around it.  Too often we rely on the USGS or the Army Corps to tell us what a stream is – when we can clearly see for ourselves whether water has formed a stream channel, if there’s a clear direction of flow, and habitat specifically adapted to a creek environment.

Mr. Scott will put the issue on the table in a 3-minute public comment during the first “Oral Communications” period of the City Council meeting on Tuesday, October 13.  If you are in the community, show your support with a 3-minute testament to what some of these unmapped streams mean to you.  The meeting starts at 6pm, not sure exactly when the first public comment period will be – but don’t be shy, fill out that speaker card and speak from your heart.

And since the issue of creek protection comes up  – a lot – here’s a new page with some info to hopefully reduce the frustrating search for what-to-do when a creek in your neighborhood is at risk: Mini-primer on how to save your creek. 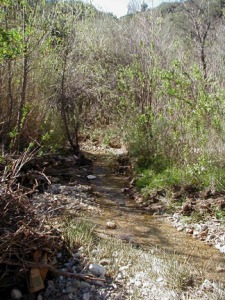 At last night’s Stream Protection meeting, an elderly gentleman in the audience mentioned a proposed development, Hidden Creek Estates, in Mormon Canyon, which would be annexed by the City to make the development possible. Mormon Canyon drains into Brown’s Canyon, a beautiful perennial stream that is a tributary to the LA River (and apparently source of the LAR Navigable Waters Jurisdication Determination kerfuffle – well the owner of Brown’s Canyon, that is).  Both were hit by the recent Sesnon fire. 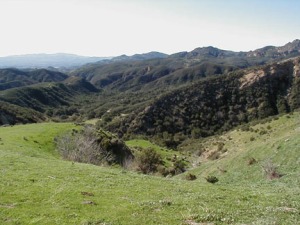 Hidden Creek Estates proposes 188 homes in a wildlands area, apparently re-grading hillsides of the Santa Susana Mountains to keep the development on higher ground.  It would be nice to see developers maintain the natural character of our mountains and canyons, something called landform grading – here it appears the slopes will be levelled and stabilized, on perfectly even slopes.  You know, the kind you see around landfills and subdivisions everywhere now. 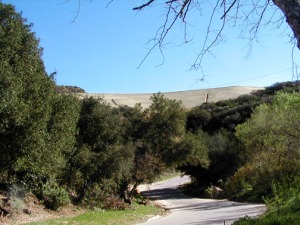 But this is a creek blog: fortunately it appears that the streams will not be built over, although one small area of the proposed development map appears to grade over one of the streams, where perhaps a bridge could be used.  Altering the hillslopes does change the sediment supply that maintains the stream’s channel and habitat, however.  The draft EIR proposes Best Management Practices to mitigate runoff, which is great, but we don’t want to cut off sediment altogether either.  But what of the wildlife?  What we are left with is a conversation of how much more of our biodiversity we can cut into.  Remember in Math class, there was this idea that you could infinitely divide something in half, and never reach zero? We are now reaching into the terrain of several 00’s after the decimal.  I sometimes wonder how much land wildlife would allocate to us, if they were the planners and developers and we were at their mercy.  Would they say, as we do, “well, as long as we preserve a representative population, it’s ok to reduce their habitat. I mean, how many of them do we need to maintain biodiversity anyway?”

Grousing about Hidden Creek aside, at least it doesn’t take the top off a mountain and dump it in canyons, like we see here in this cut and fill diagram for Mountain Gate, in the Santa Monica Mountains above Bundy Canyon in Brentwood.  You can view the actual draft and final EIRs here, click on Environmental, Final EIR and scroll to Mountain Gate.  While you are at it, scroll on over to the Canyon Hills Final EIR in the Verdugo Hills, which, while preserving one stream, will result in the loss of some of its tributaries, which are noted for their good representation of increasingly rare Southern California riparian (streamside) habitats.  Which brings us back to Math class.  How many times can we divide 1/2? 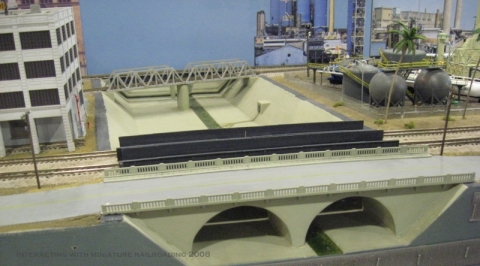 Model Train Version of the LA River near L.A. Union Station (photo by and courtesy of Miles C. at http://modelrailroading.wordpress.com click image for link)

If you’ve got time on your hands and you’re itchin’ to attend a meeting or two or five, here’s where you should be. The stream protection hearings are very important! Let the city of Los Angeles know that you want our few remaining natural streams preserved. The city is holding three more hearings, so pick the one that’s most convenient for you. I attended the first one last week and I learned about some streams I’d never known. Please attend!

You are currently browsing entries tagged with stream protection at L.A. Creek Freak.