Demolition underway at the 6.3-acre Albion Dairy site in Lincoln Heights. Photos taken looking downstream from the North Spring Street Bridge. The existing Downey Recreation Center park (with green lawn) is visible on the far left. The Los Angeles River is on the right, with the North Main Street Bridge visible.

I recently spotted a couple of projects that L.A. Creek Freak has reported on that are now making on-the-ground progress. In Lincoln Heights (photo above) the Albion Dairy site industrial buildings and parking lot are well on their way to being completely demolished. Information on that planned L.A. River park here. In Santa Monica (photo below) the Ocean Park Boulevard green street project is under construction. Information on that complete street project (including its green bike lanes) here. 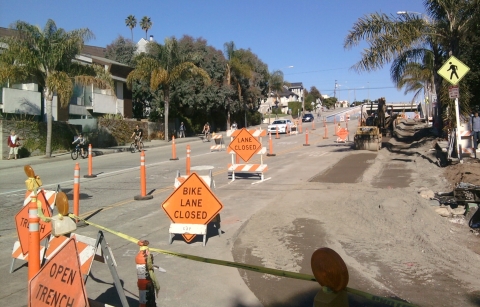 L.A. Creek Freak readers may remember the city of Los Angeles’ September 2009 acquisition of the 6-acre Albion Dairy site, adjacent to the L.A. River in Lincoln Heights. LACF ran this initial breaking news, a more detailed announcement, and photos of the site.

An update on the project follows.  END_OF_DOCUMENT_TOKEN_TO_BE_REPLACED

The city has released two preliminary design options for the new park at the Albion Dairy site in Lincoln Heights. The designs will be discussed at a community meeting coming up this Thursday night January 28th at 6:30pm at Downey Recreation Center. Higher resolution pdfs of the design options are available at the project’s website.

Analysis of and opinions on the designs follows. Come this Thursday to give your input or give input via a three-page online survey hosted by the city (link is on the bottom right.)

END_OF_DOCUMENT_TOKEN_TO_BE_REPLACED

The city of Los Angeles has announced a series of community meetings for public input on the future Los Angeles River park at the Albion Dairy site. The first meeting is this Wednesday November 18th at 6:30pm at Downey Recreation Center.

In September 2009, the city purchased the 6-acre industrial site located between North Spring and North Main Streets in the Albion neighborhood of Lincoln Heights. Earlier L.A. Creek Freak covered the purchase, background, and shared photos of the site.

From the city’s flier:

Please join First District, Councilmember Ed Reyes for the first of three meetings to discuss the future of the 6-acre Swiss Dairy site. The meetings seek to inform and solicit input from local neighborhoods and stakeholders on the possibilities to transform this site into a community riverside park.

The meetings will be hosted at:
Downey Recreation Center
1772 N. Spring St. Los Angeles, CA 90031
Refreshments and Snacks will be provided at every meeting

The flier includes meeting information, map and a background sheet. For more information on the meetings, contact Marisol Salguero [213] 485.0763 marisol.salguero [at] lacity.org or Miguel Luna [818] 568.9139 miguel [at] urbansemillas.com

Current Photos of the Albion Site

Regarding the city’s acquisition of the Albion Dairy site (and just how many separate blog entries L.A. Creek Freak is capable of squeezing out of a good big story), it seems like a lot of folks read the word “dairy” and get this very pastoral image of cows and rolling grassy hills.  So L.A. Creek Freak headed out to Lincoln Heights this morning to bring our readers some photos of the site as it exists today. Don’t let the word dairy fool you. You can see the site is indeed a fully-paved, industrial distribution center. Lots of 18-wheeler trucks, loading docks, basic industrial buildings, cars a-parking… not a blade of grass to be seen.

As our readers can see in the photo below, the Los Angeles River in this area is all concrete. Also visible in the photo are the two active railroad tracks that run between the river and the dai… er… distribution center. In the long run, as river-adjacent properties like this one are acquired, possibilities open up for river access above or below the rails, like these possible design renderings (see the four images at the bottom of the link) for the nearby L.A. State Historic Park. 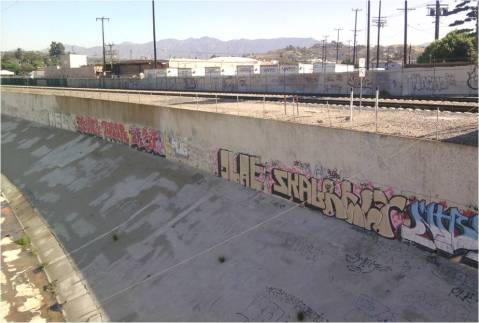 The west fence of the Albion Dairy site, viewed from the North Main Street Bridge - lots of trucks visible behind the fence

I was really excited to hear that the city was voting to purchase the Albion Dairy site earlier today, so I did my first ever blog from my phone – actually from council chambers. Here’s the follow-up story with lots more details and links.

First let me say thanks to all involved! Credit for this excellent purchase goes to City Councilmember Ed Reyes, Mayor Antonio Villaraigosa, and also staff from the Community Redevelopment Agency, the Pubic Works Department Bureaus of Engineering and Sanitation, and the City Attorney’s office. Thanks to the mayoral Director of Capital Projects Christopher Espinosa and to Council Deputy Monica Valencia for providing background information to L.A. Creek Freak.

The Albion Dairy site is a 6.34-acre site located on the northeast side of the Los Angeles River in Lincoln Heights (google map here.) The triangular parcel extends from North Spring Street to nearly North Main Street. It’s adjacent to Downey Park and Recreation Center, and across the river from Los Angeles State Historic Park.

It’s currently in operation as a dairy, but there’re no cows there – it’s more of a distribution center and warehouse sort of thing, with lots of trucks picking up dairy goods. It’s operated by Dean Foods under the Ross Swiss Dairy label; the existing lease of the site will remain through January 2011.

The city has been in negotiations for a few years. I remember hearing some inklings of a project there in 2007 or so… but it wasn’t until today that I heard that the deal had been finalized. At the meeting of the full Los Angeles City Council this morning, the vote was unanimous to approve $17.4M in Proposition O funding for site aquisition and clean-up. The actual vote today was to shift $12.5M from another pot of money already approved for Taylor Yard to add to $5M that had already been approved for the Albion site. The full council action is detailed in this 7-page report and 1-page addendum from the city’s Administrative Officer (CAO.)  The CAO report includes aquisition major deal points, cost breakdowns, and a brief project description. There’s also a 1-page project description sheet from the city’s Bureau of Sanitation.

One interesting and far-sighted aspect of the deal, told to me by Espinosa, is that the owner was helpful in consolidating a Union Pacific railroad easement that runs diagonally through the site, and forms a panhandle into the area along the Downey Park pool (the panhandle is visible at the top of the image above.) With this easement included in the city’s purchase, the city can expand Downey Park to about 10-acres – both above and below North Spring Street. Downey Park has always been adjacent to the river, but never really pertained to it or connected with it. The expanded park property will include water quality features, likely some sort of natural area that would treat street run-off before it enters the river.

It’s going to be a while before the expanded Downey Park opens to the public (and this is probably a good thing with the city’s current major budget woes.) The site will continue to service its dairy business until early 2011. At that point, the city will clean up lingering toxics at the site, which likely exist from industrial uses that pre-dated the current dairy. Then a new Los Angeles River park will be built!

You are currently browsing entries tagged with Albion Dairy at L.A. Creek Freak.