Recently, I was lucky enough to visit the Cape region of South Africa, a mecca for plant nerds, and during my last couple hours in Capetown, I had the pleasure of visiting the studio of artist/designer, Porky Hefer, maker of suspended tree pods inspired by the nests of local weaver birds.

His studio is in part of a former farm compound in Oranjezicht, a neighborhood on the side of Table Mountain, within walking distance of downtown Capetown. Table Mountain is to Capetown what the Empire State Building is to New York City. It towers above the city with its top often bathed in a cloud. The changing appearance of mountain, light and rolling clouds provides a show I found endlessly inspiring. The mountain itself is even more awe-inspiring in that it is a world renowned center of biodiversity right in the middle of a very cosmopolitan city.

I was charmed by  a modest water feature next to the discrete entrance gate to Porky Hefer’s studio. The fountain was labeled with a sign that said ‘Grondwater word hier gebruik.’ Though not running, the fountain was built to feed into a brick-lined rill, and as I walked through the studio compound, I noticed the rill appearing mysteriously in other areas of the compound.

When Porky returned from his appointment, he filled me in on the whole narrative of this water. From the first water fountain, water flows into the rill that I first saw. Then it rounds a corner, runs under a door, through a corridor, and into a brick-lined watering hole from which horses once drank. After offering the animals a drink, it runs down a couple stairs, and fills a small courtyard pool, whose reflective surface picks up the movement of the wind. After this thoughtful pause, it flows through another corridor and under a wall to connected properties, where I supposed there were gardens or orchards to be watered.

I loved the sequential integration of direct streamflow into the daily activity of a farm-turned-studio. 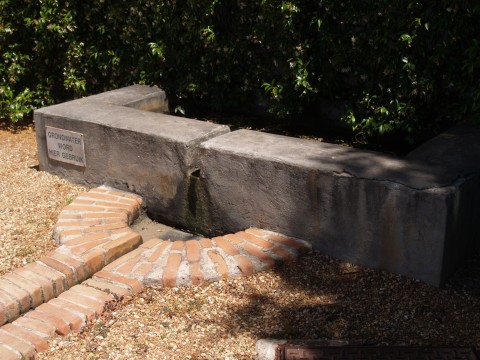 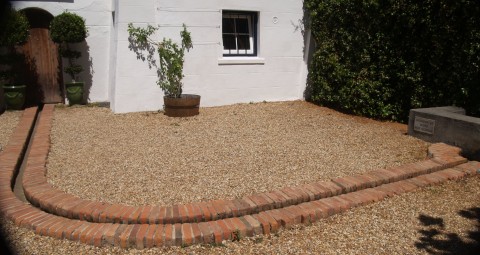 water flows into the rill, where it rounds a corner…

runs under a door, through a corridor….

after offering the animals a drink, it runs into a small courtyard pool, whose reflective surface picks up the movement of the wind…

It ends up that springs that flowed from Table Mountain inspired Khoi people to call this area ‘Camissa,’ the ‘place of sweet waters’ (where sweet means drinkable). These springs are the reason Capetown developed here. Oranjezicht springs were among the first sources of water for Capetown. Though most of the springs were eventually routed underground, Table Mountain still supplies 5% of the city’s water. The water of Table Mountain is the source of drinking water at Kirstenbosch National Botanical Gardens, where it is treated with nothing more than ozone.

Reclaim Camissa is an initiative founded by Caron Von Zeil to bring to light and celebrate the Camissa water system. Its poetically named pilot project, Field of Springs, embodies the potential of urban waters to seamlessly bridge utilitarian, ecological, and cultural life. This project was included in Capetown’s successful bid to become  World Design Capital for 2014. With Capetown in the design community’s eye, it will be wonderful if this initiative can be brought closer to implementation and inspire visionaries in other cities.

This trip was funded by the Dangermond Travelling Fellowship through the Cal Poly Pomona Department of Landscape Architecture.