Before a crowd of about 90, the city of Los Angeles broke ground on Sunnynook River Park this morning. The new Atwater Village park will be located in the mostly vacant area on the southwest bank of the Los Angeles River, between Glendale Boulevard and Los Feliz Boulevard – immediately downstream of the Sunnynook footbridge. The ceremonies were lead by Los Angeles City Councilmember Tom LaBonge, and included remarks from representatives from various city, state, and federal agencies and groups. 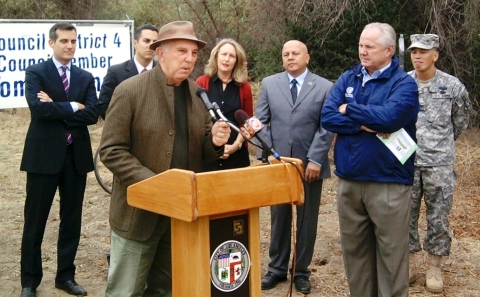 Friends of the L.A. River’s Lewis MacAdams speaks at the Sunnynook Park groundbreaking

L.A. Creek Freak wrote about the planned 3.4-acre Sunnynook River Park back in 2008 when it was being planned, and in 2009 when LADWP approved the park existing under their power lines. Though it’s not a big project, it’s been delayed a bit by state and city budget shortfalls.

Location of the planned Sunnynook River Park (from LAist)

It’s a fairly small all-natural, all-passive park, accessible mostly via the L.A. River bike path and via the footbridges that cross the 5 Freeway and the river. The site has had its problems over the years. It’s bordered by the 5 Freeway and the river, so it has been home to homeless encampments, mostly on the freeway-side of the site, maintained by the state transportation department Caltrans. Hopefully the park improvements can create a green space where everyone feels welcome and safe.

Construction gets underway now, and is expected to be completed in the spring of 2013.

(Apologies to dear LACF blog readers for not announcing this groundbreaking event in advance – for quick announcements, lately, sometimes I just post to the L.A. Creek Freak Facebook group page.)