What’s Up with this “Dry” La Niña Year?

This year, it’s La Niña – a climate condition opposite from El Niño. I confess that I am not a climate expert and I don’t entirely understand exactly how hot and cold cycles in the Pacific Ocean actually interact with Southern California weather… but, generally, the basic equation is that El Niño brings wetter winters and La Niña brings drier ones. Various sources have been predicting a relatively dry winter. For example, this KPBS story Researchers Say Strong La Niña Means Dry Winter For California states:  “Researchers say a strong La Niña means below normal rainfall for Southern California…”

Los Angeles has experienced four consecutive days of healthy rainstorms, and a doozy predicted tomorrow. This afternoon’s L.A. Times article Strongest storm yet could bring flooding, tornadoes, hail and high winds to L.A. area predicts “thunderstorms, hail, and even waterspouts and tornadoes along the Southern California coast early Wednesday.” Could this possibly be consistent with La Niña? Well… maybe.

The weather folks are perplexed. They had predicted a dry winter. Seems there is a La Nina effect at work in the Pacific and that means no rain for California. Yeah Right. El Nino (the Christ Child) effect brings rain. […] With all out scientific knowledge, computers, and historical data, we still have no clue.

To background this issue, read these extended excerpts from an interview that ran in Friends of the Los Angeles River‘s newsletter Current News in Spring 1998. The article was titled Talkin’ El Niño: An interview with Dr. Richard Minnich of University of California Riverside – by Dan Cooper. Richard Minnich is introduced as a professor of biogeography and climatology in the Department of Earth Sciences at UC Riverside. The interview was conducted March 6th 1998.

Dan: Dr. Minnich, let’s begin with the basics – what causes flooding in L.A.?

Rich: Two components are involved, long-term and short-term causes. In the long-term, the ground has to get completely saturated by rain; water hitting dry ground won’t do a thing. Now, in the short-term, it’s the hourly rates throughout the day that are important. These rates are what cause catastrophic flooding like we had in 1938. […] In January ’43, it rained 20″ in the mountains, but it was on dry ground so nothing happened. Now down in the coastal plain where everyone lives, all that concrete has led to the potential for flash flood conditions – the water has nowhere to go but into the channels. But even without concrete, major floods are possible – the floods in ’38 occurred before the whole plain was concrete and the rivers were completely channelized.

Rich: Pretty neutral, actually. Neither El Niño nor La Niña conditions were recorded that year. Another neutral year was the winter of 1966-67 – the Transverse Range got 30 inches in December of ’66.

Dan: So El Niños don’t coincide with flooding in the L.A. Basin?

Dan: So what does cause it? Have our rivers ever seriously spilled over?

Rich: Two years to remember: ’38 and ’69. The storm in ’38 was so bad it was used as a model for subsequent flood control projects in California. In ’69 we survived by a whisker – needed about another 1/2 day of rain and that would have been it. The rain rates were exceeding an inch an hour for several hours, and that’s when you start worrying. […] It’s actually the La Niñas (the periods when abnormally cold ocean currents form near the equator) that are more devastating. The so-called “Pineapple Expresses” that sweep across and hit north of here are usually more destructive than what we get. Northern California saw it in ’55 and again in ’64. The storms that characterize El Niños are strong but brief. There’s rain, break, rain, break, rain – that’s not what causes flooding.

Dan: So weak El Niños might cause more flooding than strong ones?

Rich: Generally. These result in a “standing pattern” of precipitation – the storms just sit over us and dump rain. With strong El Niños, all that energy is constantly available and being renewed, and the storms just peel off quickly and zip across us, one after the other.

Dan: So describe this past season. How did the flooding compare with past years?

Rich: This February [1998] was the wettest on record – no doubt a major event occurred. But in terms of flooding, we’re only talking about maybe a 5-10 year flood event.

I would summarize this to state that La Niña years are characterized by very intense storm series… just like, well… this week. These take place in a drier-than-average winter season… just like this year? [that’s rain year, roughly September 2010 through June 2011] Only time will tell. Will we have a dry Spring? Looks like a good possibility… but there could be larger forces at work – perhaps global climate change?

L.A.’s history includes plenty of flooding. Even before we paved so much of it, our basin flooded. Often. Massive floods in 1934 and 1938 spurred the concrete channelization that we see today. Plans for the armoring grew out of the destructive 1914 floods. Press accounts at the time were filled with the hyperbole we hear today (which Jessica mentioned here yesterday.) According to Jared Orsi‘s Hazardous Metropolis, the 1914 storms were characterized in their day as unprecedented and unanticipated. Orsi continues: (links added)

These and other declarations, however, contradicted much other evidence. The dozens of old-timers whom engineers interviewed in the aftermath of the 1914 disaster almost unanimously agreed that the floods of 1862, 1867-68, 1884, and 1889 were larger in terms of the land area they inundated and the total volume of water they discharged.

I’m thankful that this La Niña has brought us the precious rainfall that she has. This week’s rains are heavy… and dangerous… but not unprecedented. Be careful out there. 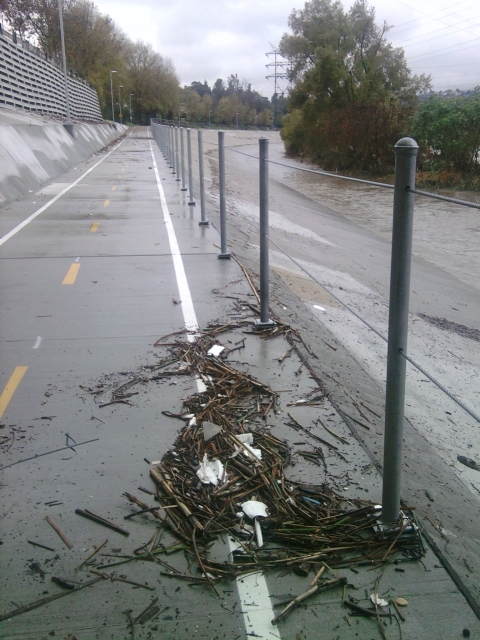 You are currently reading What’s Up with this “Dry” La Niña Year? at L.A. Creek Freak.