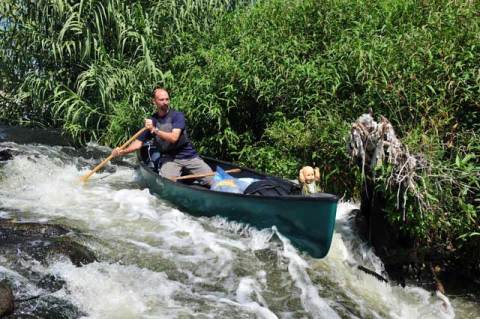 LAist photo of George Wolfe navigating the L.A. River. For more navigability stuff, watch the Rock the Boat movie and read lots of coverage - links and details below.

> From 3pm to 5pm this Thursday July 15th 2010 join the Village Gardeners and TreePeople to trim and mulch native vegetation on the L.A. River in Sherman Oaks. Event details here.

> Watch the film about the 2008 Kayak expedition that proved that the L.A. River is navigable today! Rock the Boat screens this Friday July 16th 2010 at the Audbon Center at Debs Park. That’s at 4700 Griffin Avenue in Highland Park, easy walk from the Southwest Museum Metro Gold Line Station. Birding walk at 6:45pm. At 8pm two films screen.  First: Paddle to the Sea – a short film based on the classic children’s book. Second: Rock the Boat. Admission is free – though donations for Rock the Boat will be accepted. More event information at Audubon and Facebook.

> **UPDATED – POSTPONED SEE COMMENT BELOW The city of Los Angeles LID (Low Impact Development) ordinance will be heard at the 9am Tuesday July 20th 2010 meeting of the city council’s Energy and Environment Committee, which takes place room 1010 on the 10th floor at Los Angeles City Hall. Background on LID here and here. Committee agenda will be here, once posted (should be up Friday this week.) Follow the LID city council motion 09-1554 here, including RSS feed.

> Another excellent L.A. River documentary is now available online. Watch The River Under the City of Angels by Fred Kaplan (27 minutes, 2010.) It’s very personal and poignant, with lots of great footage from all up and down the Los Angeles River, plus interview footage with Lewis MacAdams, Ed Reyes, Carol Armstrong, Scott Wilson, Jenny Price and others. Well worth watching!

> The Pasadena City Council met last night to consider building soccer fields at Hahamongna nature park. We’re hoping to report more on this as we get more news (or to link to a full account), but the council voted 4-3 to proceed with fields at the site. Read Creek Freak background on the issue here and visit Save Hahamongna to get news and get involved.

> Dredging Today “dedicated to dredging” reports that Dutra Dredging has been awarded a $1.3M contract for dredging the Los Angeles River estuary. Your federal stimulus funds at work.

> The White House and GOOD magazine like Environmental Charter High School in Lawndale. L.A. Creek Freak was there in April 2010!