A manmade creek runs through the Bimini Slough Ecology Park

Located on the northeast edge of Los Angeles’ Koreatown, the Bresee Foundation’s Bimini Slough Ecology Park is an excellent and innovative example of how we can heal our urban watersheds and bring green spaces to underserved neighborhoods. I was glad to see that my co-blogger Jessica promoted this park in Emily Green‘s recent L.A. Times column entitled The Dry Garden: Capturing the spirit of L.A.’s streams, even if they’re gone. Here’s an excerpt:

No matter how many rain barrels we put out and percolation pits we dig, many homeowners can do only so much in compensating for the absorptive and cleansing power of lost streams. Because many sites cannot capture all the rain that falls on them or flows through them, [Jessica] Hall sees cleverly situated public water-catching projects as crucial companion pieces to the water gardens put in by homeowners.

Asked to point one out, Hall chose the Bimini Slough Ecology Park. Designed by city landscape architect and wastewater engineer Nishith Dhandha, this mere half-acre sandwiched next to the Breese Community Center in Koreatown acts as a giant filter by taking urban runoff from a full city block. First it captures the water, then passes it through grates to catch trash. From there, the storm water runs through a meandering marsh, where riparian plants do what they have always done: cleanse the water.

That quote tells the basic story of the Bimini Slough park, located at the corner of Bimini Place and Second Street. Our readers know that I am capable of turning a short story into a really long one, so… what follows is that long story: how to get there, the history of the slough, how the park came about, and what it features.

HOW TO GET THERE:

The Bimini Slough Ecology Park is located at the corner of Bimini Place and Second Street in Koreatown, Los Angeles. It’s generally open only during daylight hours; locked at night. It’s  owned, operated and maintained by, and immediately adjacent to the Bresee Foundation Community Center (at 184 Bimini Place, L.A. 90004 – map and driving directions here) and right behind the Vons at the corner of 3rd Street and Vermont Avenue, which has a huge parking lot. (hint! hint!)

The site is easily accessed from the Metro Red Line. From the Beverly/Vermont station, walk or bike three blocks south on Vermont, then go left on Second Street.

You can, of course, visit the park on your own. It’s also featured on reqular Los Angeles Eco-Village tours.

HISTORY OF THE BIMINI SLOUGH:

A slough is a kind of broad low-lying wetland area, sometimes seasonal, usually impassable. Slough is pronounced “slew” – rhymes with “through.” Sadly, even the colorful multi-varietal language of wetlands and creeks is disappearing as we drain, bulldoze and bury them.

The Bimini Slough was a swampy stretch of Arroyo de la Sacatela, also called Sacatela Creek (and occasionally spelled Sacatele.) Sacatela, a Native American place name, is one of many tributaries to Ballona Creek in the northeast portion of the upper Ballona Creek Watershed. It drains a portion of the southern facing Santa Monica Mountains from the communities that today are called Silver Lake and Los Feliz.

The path of Arroyo de la Sacatela is somewhat traceable from historic bridges in the area. The main stream of Sacatela Creek flowed in the gullies below the 1926 Franklin Avenue Bridge (known as the Shakespeare Bridge) and the 1929 Sunset Boulevard Bridge over Myra Avenue. The eastern fork of Sacatela ran along what is today Silver Lake Boulevard, below bridges at Sunset (1934) and Temple Street (1934.) Today the creek still flows in stormdrains below ground at these sites.

These forks come together around what is today the playing fields of Virgil Middle School.  The fields are in the back of the school – along Westmoreland Avenue from Council Street to First Street. (Note: these fields are planned move, with a new elementary school to be constructed there.) First Street still has a distinct dip between Virgil Avenue and Vermont Avenue; that dip is the bed of Sacatela Creek at the Bimini Slough.

Here’s an aerial photograph from the L.A. Public Library, undated, but I am guessing it’s probably from around the 1920’s or early 1930’s (according to Wikipedia, then Virgil Junior High School opened at this site in 1931, and from the photo it appears that the front of the school is built):

Here’s an undated L.A. Public Library photo of the Bimini Slough, behind the Bimini Baths: (this is probably also from approximately the 1920’s)

Undated photo of the Bimini Slough. The slough runs diagonally along the right side of the photo, and is straddled by a wooden streetcar bridge. The road at the top is First Street. On the left is Bimini Place. In the foreground is Second Street - the portion of Second that would later be closed and become the park.

Arroyo de la Sacatela continued southwesterly and flowed just west of the Ambassador Hotel (historic photos here and here.) It’s noticeable as a gentle dip in Wilshire Boulevard at its intersection with Mariposa Avenue (one block east of Normandie Avenue.) Its confluence with the main stem of Ballona Creek was near what is today the intersection of Arlington Avenue and Country Club Drive.

The creek and slough were confined to underground drains by the middle of the 20th century. It’s not easy to find traces of them in the landscape today.

HISTORY OF THE NEW PARK:

Fast-forward to the late 1990’s, and two non-profits which are located on this block:

The Bresee Foundation, under the leadership of Jeff Carr, began to make plans to close a block of Second Street to create a small park. Initial estimates for park construction looked to be about $400,000… until the city requested a $400,000 underground storm drain be built to get rainwater from one end of the park to the other. Carr told eco-village founder Lois Arkin about this, and she brought in the non-profit North East Trees to use that water, instead of getting rid of it. The solution of flowing that water on the surface of the park ends up being cheaper and better than building the infrastructure necessary to put that water in a huge pipe underground.

North East Trees designed a small park that features a creekbed bio-swale running through it. During much of the year, the creek is pretty much dry. When it rains, water from streets runs into the park. Vegetation in the creekbed slows down flowing rainwater. This helps settle pollutants carried by the stormwater. The pollutants settle into the soil and are broken down by microorganisms. In addition, some of the rainwater infiltrates into the soil, recharging our groundwater.

In addition to providing recreation and relief for the community, the park provides multiple watershed management benefits. It improves water quality (and air quality), increases water supply, provides habitat, and reduces risk of flooding. I like to say that we need thousands of parks like this spread throughout our communities, then we will have restored more healthy watershed functions, then we can more easily remove much of the concrete from our rivers and creeks… and daylight many of the creeks that we’ve buried underground.

(Some have called this a daylighting project… which it isn’t quite. It is a dramatic improvement, though, to unpave a street and turn it into a creek park!) 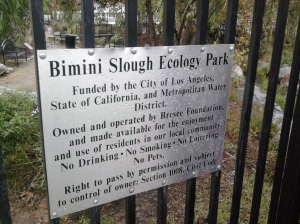 Ultimately the 1-block  20,000-square-foot (about a half-acre) park cost about $750,000, which Bresee raised from donors, the city, state, and Metropolitan Water District.

Second Street was vacated in 2003 and the park was constructed and opened in January 2004. Bresee’s park website tells the basic story of the park, including youth-produced videos on  park construction and opening. One features L.A. Creek Freak’s Jessica Hall.

A LOOK AT THE PARK TODAY:

Rainwater runoff from neighboring streets runs down the street gutters and enters the park through an inlet along the curb at the west end of the park:

Water flows a short distance underneath the sidewalk, then enters the park. Immediately inside the fence of the park, trash is strained via a half-circle shaped metal grate:

The boulder-lined creekbed runs the length of the park. Much of the year it’s dry like this:

Last weekend’s rains caused it to have a nice flowing stream: 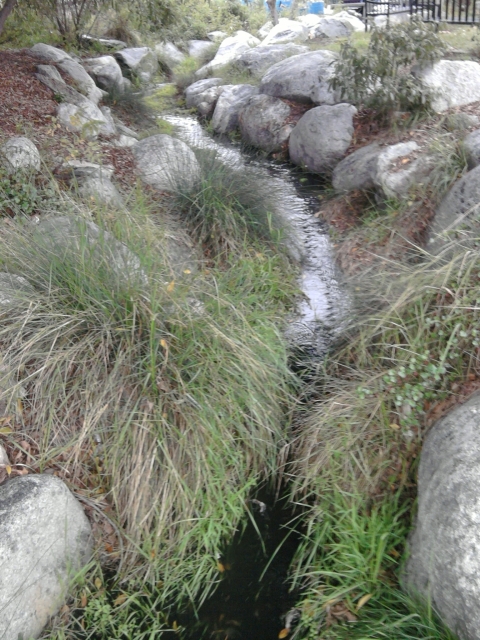 The creek flows during rainy weather

The creek flows beneath a short footbridge in the middle of the park (this shot also shows the small tot-lot playground with slide): 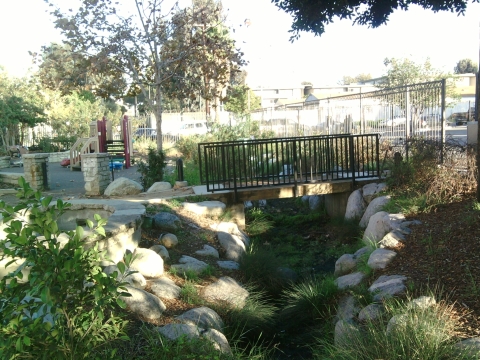 At the east end of the park, the creek empties into a storm drain:

Storm drain inlet at the east end of the site

The bottom of the creekbed is reinforced with latticework pavers. I heard that some of the folks who worked on the design opposed these, but ended up including them to make it easier to obtain permits. They probably minimize erosion (a natural process), but they end up creating a somewhat uniformly flat bed… which doesn’t quite look like or quite function like a natural creek does. Luckily they’re mostly invisible as vegetation grows up through them: 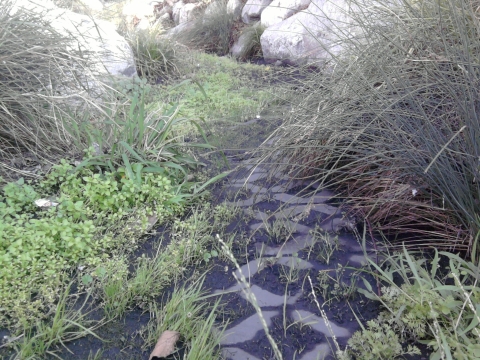 The park features a walkway connecting Bimini Place with Juanita Avenue. There’s a small payground area with a slide, a fountain feature (now broken), and a small grassy area with benches: 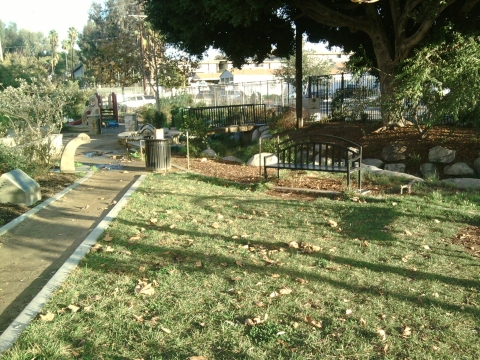 Other than the lawn, the landscaping is all drought-resistant, and nearly all California Natives. These include California Sunflower, California Rose and Matilija Poppy.

When the park first opened, it included three 10-15′ tall native sycamores, planted from very large containers. Interestingly, willow trees immediately grew up on their own (likely from seeds, either brought by birds or in the soil from initial plantings) and are, today, about the same size as the sycamores. It’s impressive to see how quickly the willow trees grow when they get their roots in the water. The willows were forming such a thicket that some had to be trimmed/removed to allow for more visibility. Birds, including bushtits, nest in the willows.

The park is not without its problems. It’s fairly small, so it doesn’t generate that much usage… so it’s not uncommon to find homeless folks sleeping on the benches there. Some trash washes over the grate and into the park; some washes in from the Vons parking lot. Some apparatus initially set up for water monitoring mars the otherwise natural aesthetic (I had heard that these were temporary… perhaps they’ll be removed someday.) Bresee youth recently removed some of the native vegetation to make way for a small food-growing garden… as this gets going, it could generate some of the activity that the park seems to need.

I think that this kind of park is important for people to make connections with water quality. If my children play in the Bimini Park creekbed, and I can see that my oil and my trash runs from my street into that park, then I am less likely to dump those things in my street. The more we can reveal rainwater and where it goes, the more we help people make connections with it.

The park took a lot of effort by Bresee and NE Trees to get permits for something that hadn’t been done in L.A. before. It remains an important and trailblazing example that demonstrates that we can remove roadways, uncover and heal the earth, and again allow our creeks to flow though our neighborhoods.