Preliminary maps of the Dominguez Watershed

First of all, the watershed boundary is based on the contemporary watershed, as you can see in the old maps, today’s boundary would also include portions of Compton Creek, for example.  As the streams were straightened and culverted or channelized, subdrainage areas were also reconfigured – hence the change. 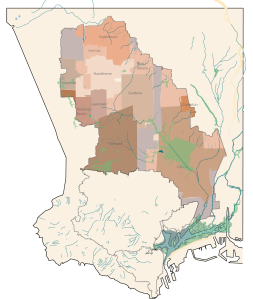 Dominguez watershed overlaid with detail from 1920s-30s USGS maps. Map is a work in progress.

The next big difference (to me) is that the 1920s-30s era map has so much more detail than the 18906-1902 map.  That’s because the later map was drawn at a more refined scale.  So we see streams and sumps that I’m classifying as wetlands/vernal pools(in green) that don’t read in the earlier map – but we can bet they were there, research and oral histories indicates it is so.  Another big change is that the large Dominguez Slough converted in a mere 30 years to being mostly open water to mostly wetland or sump or wet meadow (see large blue and green areas on the maps).  This is the result of deliberate draining of the wetland, today’s Dominguez Channel being the descendant of that earlier effort.

Dominguez watershed today – with some info missing, this is a work in progress.

So in less than 100 years, this has become quite the desiccated little watershed (the white and orange line are the stormdrains, almost no blue anymore, green is a missing layer to be added, but will be small) – to say nothing of polluted.  Not covered by these maps is the shift in land use.  Wetlands, often being considered a waste (once the hunt clubs have had their fill of the game I guess), get drained for agriculture, and then, being still floodprone, tend to get pretty undesirable zoning – our Dominguez Slough was no different:  chemical and petroleum industries set up shop over much of the wetland and today some areas are Superfund sites.

§ One Response to Preliminary maps of the Dominguez Watershed

You are currently reading Preliminary maps of the Dominguez Watershed at L.A. Creek Freak.