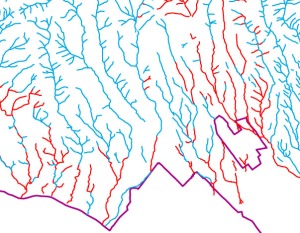 Streams present and past, from Pacific Palisades to Bel Air. Blue streams are present, red are gone, baby, gone. 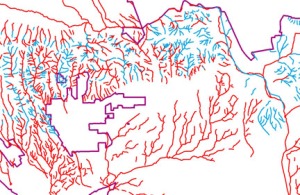 And here's the (mostly former) streams of the Hollywood Hills and part of the upper Ballona Creek watershed. Blue lines on the right will soon be deleted, as soon as I get around to the Elysian Valley and streams Northeast.

I am in the midst of a depressing exercise of stream deletion, viz. the image at right.  Once again, mapping streams of LA, and then deleting them to be able to say with some reliability what’s left.  It’s painstaking as well as simply painful.

While simultaneously reaching for some (legal) numbing agent and zooming in a former stream on the north slope of the Hollywood Hills on GoogleEarth, however, I noticed urban runoff dribbling down the gutter.  I was looking for any chance that a stream channel persisted (further down the road, there was in fact an open semi-channelized waterway – so it wasn’t entirely empty hope).  Curious, I followed the runoff upstream, till I arrived at what was clearly a stream.  And it is pretty apparent that the runoff is coming from the stream.  The next canyon over showed a similar pattern of runoff.  And it was in the month of July, so not seasonal, this.

The stream is dribbling (dark stain on left side of the street). From GoogleEarth, dated July 31, 2007.

I often find myself wondering during conversations about “urban runoff” how much of it is genuinely from some idiot watering his or her driveway.  True, we have no shortage of waste from poor water management, and plenty of it is polluted.

But here is interesting evidence that some runoff is from a stream just being a stream – and that it would still be flowing in a stream if we hadn’t rammed a street through it.  Suggestive to me, anyway, that we might want to have a policy for managing this urban runoff a little differently than treating it like wastewater.

You are currently reading Urban runoff? at L.A. Creek Freak.