Watering Trees from my Washing Machine 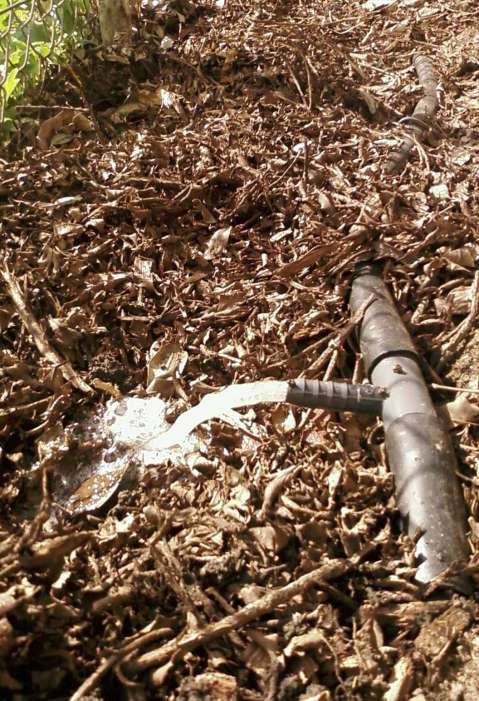 That's my washwater, flowing out onto a mulch bed!

A few weeks ago, the Greywater Guerillas visited the Los Angeles Eco-Village. They delivered a public talk, and held a workshop where we installed two basic greywater systems. Both systems pipe washing machine output water to water trees and plants.

What is greywater? It’s basically any waste water that we generate from our sinks, bathtubs or washing machines. (Blackwater is from the toilet – and that’s another story.) For most Angelenos, right now, all this water gets combined into our sewer which takes it to big energy-intensive “water reclamation” (aka: sewage treatment) “plants” (factories.) A few of these are along our local rivers: the Tillman Plant in the Sepulveda Basin, and the LA-Glendale Plant. The local plants discharge tertiary treated wastewater (nearly as clean as drinking water) into our rivers, creeks, and the Pacific Ocean. For the L.A. River it’s generally not such a bad thing – adding unpolluted water helps keep the river’s wetlands wetter. It makes up for missing natural flows that we’ve dammed and otherwise blocked.

Mostly we import this clean/fresh water from other regions at great costs (fiscal, environmental, energy), then we use it once and send it down the drain. One way to conserve water is to re-use greywater on-site. There are many ways to go with greywater… from simple to very complicated. For this blog entry, I’m going to tell one story: how my new system works. If you’re looking to do your own system, you might want to check out resources on the Greywater Guerillas website, or read Create an Oasis with Greywater: Chosing, Building, and Using Greywater Systems by Art Ludwig.

Here’s my washing machine today, sitting in the back room of my second story apartment at eco-village. It’s a front-loader, which is generally a bit more water and energy efficient than a top-loader. You can see the greywater piping at the top behind the machine – the end of the machine’s black flexible-pipe outlet has been hooked to a T-valve (see close-up and explanation below.)

Note also the piece of paper taped to the front. I had guests in town staying at my place last week, so I put up a small sign that reads: “GRAY WATER / Washwater drains to garden / No conventional soaps or toxins.” When you do a greywater system you can’t use regular detergent (not even your basic eco-detergent) because they can accumulate salts or other toxins in your soil. There are a few different biocompatible detergents available at local health food stores. I use Oasis laundry detergent which is specially formulated for greywaters systems.

One problem I’ve had is that the down-pipe (the connection to the sewer) doesn’t really work in my apartment. If we hook the washer up to the sewer, then it leaks into the apartment below me. What I did in the past to get around this was to set up a very rudimentary system – which is an example of how NOT to do greywater (and is not pictured here.) I set up the washer to drain into a 50-gallon plastic tub. From the tub, I used a hose with a quick-connect to siphon drain the water into the garden. The system basically worked, but has many drawbacks and hassles. Most notably that the water in the tub gets rather nasty and smelly after a while (needs to be washed out periodically, probably every month if you don’t want it to smell at all.) I lived with it for nearly 10 years. It was a bit more convenient and much more eco than toting my laundry to a laundromat, but right now, I am very happy to have a reliable eco-friendly system that I don’t have to actively siphon the last load’s water before starting the next load. I do suggest that “tankless” systems are the way to go… and never set up anything where you let greywater stand for any length of time.

Close-up of the 3-way Diverter Valve above the washer

Back to the new system. Here’s a close-up of the “T” that is right above the washing machine. The valve is called a 3-way diverter valve. Normally there would be one more pipe extending horizontally to the right in this image – which would allow me to send water to sewer when I wanted to (by just turning the red handle.) As I mentioned, the sewer connection leaks, so for now, we didn’t connect to it. We included the valve though, in case we ever repair the down-pipe. I used a black plastic-tie to wire the red handle into the only proper direction – sending the water that’s coming up the black pipe leftward into the white pipe. The water then leaves the building.

Greywater Pipe from the Second Floor to the Ground

Outside, here’s what the pipe looks like. The washing machine is behind the window at the top left.

The pipe comes horizontally out through the wall, then makes a turn downward. There’s a little one-way air-vent device extending upward at that T (it’s white with a black top.) I have to confess that I don’t entirely understand what kind of vent it is, nor how and why it works, but it’s supposed to prevent an inadvertent siphoning that could suck water from the delivery pipe back into the washer.

There’s another T below that (it’s right below the wiring and above the door – with a red handle.) This valve is for a potential future container wetland that I fantasize about doing in this area someday.

The pipe continues between the back doors of my unit and my downstairs neighbor’s.

At that point we needed to get across a very tiny courtyard space. We sawed through the concrete to get below grade (so the pipe wouldn’t be trip hazard.) We ran the pipe across underground, then came back to the surface. This does create a small sump spot where some water collects and sits. The Greywater Guerillas suggest that this won’t be a problem because it’s a very small volume of water that won’t sit for too long before the next load of laundry completely flushes it. It might get somewhat gunky if I go on vacation and don’t do laundry for a few weeks.

Our excellent handyman, Dale Kreutzer mortared in over the pipe, adding a strip of tiles for decoration. I like that the tiles serve to draw attention to how the system works. One of my many missions in life is to reveal water processes that we generally tend to hide.

Greywater Pipe along base of wall

As the pipe resurfaces it makes a turn to run along the base of the wall of the building. (I’ve stepped across the small courtyard and am taking this photo from my back door – the tile over the underground pipe is visible in the bottom right corner of the picture.)

Greywater Pipe continues around base of wall

In the upper left corner of this photo, there’s another T-stub for a future project. We’re beginning to take up some of the concrete in this area, which was formerly dedicated to parking, but will soon be a garden.

The pipe then goes through a gate and below a sidewalk (not pictured, but imagine another tile strip, though we haven’t gotten to it, yet) to emerge into a garden space. The area watered is along a fence. We dug a very small trench there, filled that trench with mulch. We planted blackberries along it (they’ll grow up the fence.) There’s a also a pair of feijoa trees (sometimes called pineapple guava) there. The trees are actually pretty drought resistant and do fine with the rainwater available here, but they will be happier and will yield more with added water at their roots.

The “emitters” are small T-joints which you can see in this image (or in the close-up photo at the top of the blog entry.) There’s a fence to the left (where the blackberries are beginning to grow) and a path to the right. The mulch trench runs along the left half of the photo – between the fence and the mostly-exposed black pipe.

It’s most clear from the photo at the top of the entry, but the greywater is indeed discharged into the air, then immediately soaks into the mulch bed, so there’s no standing water. If the end of the pipe is underground, then you can have problems with roots growing into it. There are fancier ways to discharge below ground – again see the book and website listed above.

You don’t want to use greywater on things like potatoes (where you eat the roots) or lettuce (where you eat the leaves that grow very close to the soil surface.) It’s best for perennials like trees or vines or even tomatoes. There’s a small health risk which can result from eating something that’s been contaminated by directly exposure to greywater. If you set things up right and keep them maintained in working order the risks are negligible.

The system has been up and running for about a month now and is working great!

(In the spirit of those 3-way diverter valves, this entry has been triple-cross-posted at the L.A. Eco-Village Blog, the LAEV Garden Blog and L.A. Creek Freak. Apologies to folks like my mom, who I am sure reads all three.)

§ 7 Responses to Watering Trees from my Washing Machine

You are currently reading Watering Trees from my Washing Machine at L.A. Creek Freak.