Recent News and Upcoming Events in the World of Los Angeles Water – 2008 September 8th. One in an occasional series of blogs where the links expire more quickly than usual:

Good news for fish: on August 27th, the Pasadena Star-News reported the celebration of the completion of the Arroyo Seco stream revitalization project, including the introduction of 300 Arroyo Chub – a threatened native fish species.

Bad news for fish: on August 29th, the Long Beach Press Telegram reported the deaths of approximately 1000 fish (mainly carp) in the lower Los Angeles River. A September 4th follow-up story suggested a possible link between the dead fish and an August 23rd fire at the Norman, Fox & Co. chemical plant in Vernon.

Other morbid Long Beach news: August 31st, the Contra Costa Times reported that Long Beach firefighters pulled a the body of dead man out of the river near Ocean Boulevard. No connection suggested to any upstream fires. 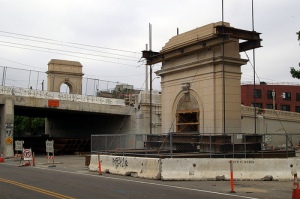 Troubled Bridges Over Waters: on September 2nd, blogdowntown reported on the dismantling of a portion of the 1929 First Street Bridge in order to make way for widening for lots and lots of cars and the tracks for the Metro Gold Line eastside extension. Though they are planning to keep most of the pieces for later re-assembly, this creek freak and self-proclaimed bridge geek feels that the bridge (which originally had streetcars running down the middle of it) was already plenty wide to begin with. Click here for the Historic American Engineering Record’s beautiful drawings recording many of the great local Merrill Butler bridges. Merrill Butler was the Los Angeles City bridge engineer from 1923 through 1961.