Day three was exhausting. We put in at Marsh Park in Elysian Valley and paddled our way to the river’s mouth in Long Beach. This is about 25 miles, more than 20 of which are three-sides concrete. A quick apology – I didn’t take any cell phone photos that day. It seemed like there were lots of photographers all over much of the time taking photos – see links at the end of the blog below for excellent photos – especially LAist and Ted Soqui. I did paint one watercolor of the river at Marsh Park, while we were running late on the put in. 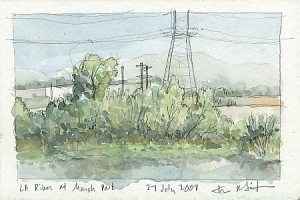 Marsh Park is located in the Glendale Narrows, pretty much the nicest stretch of the whole river. Due to groundwater coming up in this area, the bottom of the river is unpaved, so there are lots of tall willows, turtles, ducks, heron, egret, and more. It’s where people who visit for the first time gasp and say “wow – it is a river!” Also at Marsh Park are the best rapids of the whole river. It’s a short chute that has plenty of slope and plenty of flow. Very fun, but it also can capsize folks like me who haven’t had much kayaking experience. On a test run, a week in advance of the trip, I did flip my kayak, though on a second try and on the official expedition, I was able to shoot through it unscathed. A few of crew flipped and received a river baptism that morning. The trick is not to lean upstream, so the river doesn’t catch the lip of your boat.

The next two miles were very nice, despite a few spots where we’d get stuck among rocks and have to portage a bit. It’s plenty navigable, and very beautiful. I kayaked up at to two older Latina women and a man whom I chatted with a bit with. They said, in Spanish, that they were harvesting “yerba mora” and another plant, which they used to make soups.

Just upstream of the Riverside/Figueroa Bridge the soft-bottom stretch ends and the all-concrete canyon begins. We gathered the troops and spoke a bit about the historic confluence with the Arroyo Seco and a bit about safety, then started down the concrete low-flow channel.

We cruised under the great historic City Beautiful bridges. The North Broadway Bridge (originally and formally the Buena Vista Viaduct) located along the Cornfields is the great early progenitor of the series. It features some of the earliest compound arches made of concrete – a technological advance that made the understructure of the bridges lighter, though still majestic. As we went under each of the historic spans, I was noticing that as time progressed (ie: the later date that the bridges were built), the understructures become lighter and more airy. Unfortunately, as time progressed, these become so light that they skip the arch and just put the straight flat girder across.

There was a construction site at the First Street Bridge, where crews are widening the bridge to make space for more cars… er… I mean to make space for the eastside extension of the Metro Gold Line, while allowing for lots of cars. I am cynical about this because nearly all these bridges had streetcars running down them originally, and now when we want to run the trains down them again, the experts tell us that we have to tear out the original structures. The First Street Bridge widening isn’t as bad as some others proposed. I will write more about the threatened bridge demolitions in other posts later. We portaged around the low temporary construction bridges and continued downstream.

I was surprised at how shallow the low flow channel is. When I’ve led tours of the river, I get questions about how deep it is, and I’ve always responded that it’s 3-4 feet deep, based on seeing folks in it occasionally… but actually being in it, paddling a kayak, I now realize that it’s quite shallow. My paddle was frequently scraping bottom. It’s really only 1-2 feet deep. That doesn’t sound like a lot of water, but it’s enough to float a kayak – without much scraping – yay! It can still be a bit treacherous to cross on foot – the water is moving fairly fast and the sloped sides can be pretty slippery.

Near the Washington Boulevard Bridge and the start of the city of Vernon, the walls of the channel go from sloped (trapezoidal channel) to vertical (box channel.) The river makes a left turn. The smells get bad and the low flow channel splits and gets shallower. I had expected that we’d have to portage this area, but were able to float and scrape and get by. The walls go trapezoidal again and the central low-flow channel resumes where the river flows under Bandini Boulevard in Vernon.

I have to say that I was somewhat impressed with the stark featurelessness of the river below Bandini. Seems like nearly everywhere in nature there are differences and variety, but, here on the river in southeast Los Angeles, there is surprisingly little variation in slope – for miles. The engineers and the construction crews did a great job of creating a nearly entirely continuous smooth unrelenting gradual drop all the way from downtown to the ocean. There are a very few places where the slope increases slightly – very short drops, often after bridges, and one small chute around Southern Avenue in South Gate. If the slope were more uneven, perhaps there would be more problems with sediment settling out of the water. It’s an impressive feat of engineering.

I was also impressed with how nature is reclaiming the river. In many places, from the mouth of the Arroyo Verdugo, to just upstream of Willow Street in Long Beach, there’s a fair amount of vegetation growing either through the cracks or on a layer of silt atop a concrete bottom. Most of the vegetation is opportunistic weedy, but there are occasional cattails and even willows. Even in middle of Vernon (at a location I don’t want to disclose for fear of alerting the flood control bulldozer crews), I saw a 10-foot tall willow tree growing out of the concrete along the low flow channel. This vegetation creates eddies, slowing down the water, causing it to deposit sediment, building up sandbars and making way for more vegetation. It’s nature’s cycle of reclaiming disturbed areas. Microorganisms move in, then bugs, then ducks. It’s great to see it starting to happen in the concrete moonscape areas downstream.

We stopped for lunch at Maywood Riverfront Park, located at Slauson Avenue. I checked out the now-open park; its opening had been delayed for years due to concerns over possible contamination from a chemical factory that occupied a portion of the site. There were lots of families enjoying their Sunday afternoon and the recently-very-pristine ball fields were showing signs of plenty of use – a good sign in my book. The adjacent mini-park built by North East Trees looked good too, though it’s clear that the battle against graffiti has resulted in a lot of beige paint coating the river rock retaining walls.

We continued downstream. The concrete gets pretty relentless. Though I am not a big fan of them, I was actually really glad to see the Adel Rakhshani murals in the city of Paramount, as they helped break up the unrelenting grayness of it all.

There were quite a few birds hanging out in the all-concrete channel, including black-necked stilts, gulls, ducks, killdeer, and occasional herons and egrets. Closer to the ocean we saw more shorebirds – a few different types that I am not too good at identifying. As Jeff Tipton and I kayaked under a bridge, one black-necked stilt, with three cute small stiltlings in tow, became very animated. She (I am assuming it was a female) shrieked and flew near us, keeping just ahead of us, seemingly trying to draw our attention to her and away from her kids. Small families of ducks would swim in the channel. When l saw them downstream in front of me, I would kayak faster to catch up with them. The mother duck would corral her youngsters getting them to do their wobbly half-runnning double-speed maneuver to evade their pursuer. The ducklings would pop underwater to get away as I passed them. My other trick to punctuate the monotony of the lower river would be to paddle strongly to each bridge, then to slow and coast and rest in the precious shade underneath.

The way was only slightly punctuated by passing landmarks that I was familiar with. In the city of South Gate, the river’s confluence with the Rio Hondo was very anonymous. I almost didn’t notice it. The broad channel hardly contributed any flow to the LA River. The historic 1937 concrete-railing Atlantic Boulevard Bridge marked our entry into Long Beach. I thought that, at least, now we could say that we’d made it to Long Beach… though we still had a good half-dozen miles to go. Soon thereafter we passed the mouth of Compton Creek.

The concrete bottom ends at Willow Street in Long Beach. The river widens a bit more there, so the engineers added features to create turbulence to make the river spread out to to it’s full width. Before the bridge are a series of concrete block baffles. Unfortunately this meant another short portage. Where the concrete ends and the estuary begins is a fairly good looking place when you’re walking and bird-watching above it… but when you’re down in the water, it’s kinda nasty. This is another thing I learned from this trip. At the very start of each of the three areas where the concrete ends (below the Orange Line Bridge in Sepulveda Basin in the San Fernando Valley, at Bette Davis Picnic Area, and at the estuary in Long Beach), there are nasty smelling areas with duckweed and small bubbles of foul-smelling gas surfacing. When I stepped in the sediments in these areas, my foot sunk down into the quicksand-like sediment sending up clouds of gunky black cloudy water.

We pushed on down a very nice short rapids and came into the tidal zone of the river. Signs on the bridges told us that all kinds of activities weren’t allowed here, but that if we did them, we’d have to keep within a 5 mph speed limit. We saw more cormorants, herons, pelicans, and occasional fish jumping out of the water.

The sun was beginning to set as we rounded the final bend and caught sight of the Queen Mary. Lots of families were fishing from the breakwater. We passed beneath the Queensway Bay Bridge, pulled up along the breakwater and pulled out at Shoreline Park. Families and friends were there to greet us. We began to tell our tales and to speculate on future trips down our very navigable local waterway.

Here are some links to trip photos/articles/blogs: